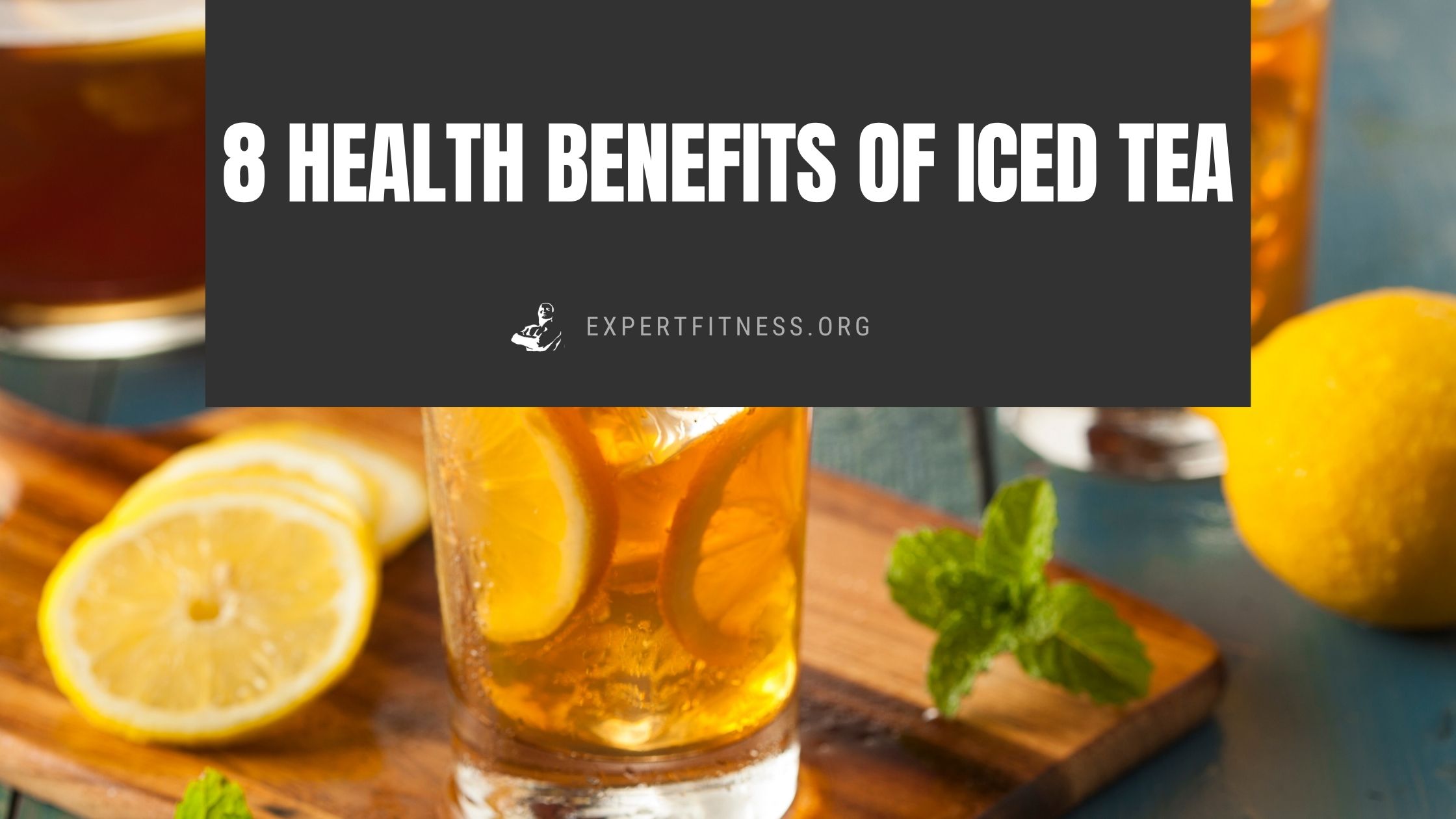 Tea has a long and illustrious history, purportedly discovered about 5,000 years ago by Chinese Emperor Shen-Nung, aka “The Divine Healer,” when leaves from a wild tree blew into his pot of boiling water. He was then immediately interested in the pleasant tea scent and drank some. He even described it as a warm feeling, as if the liquid was investigating every part of his body.

From then on, the popularity of tea grew rapidly. So much that today, it is the most widely consumed beverage in the world after water with over 159 million Americans drinking the beverage on a given day, according to the Tea Association of the USA. Even Starbucks is bucking up its tea menu.

From decreasing cell damage to removing free radicals in the body and soothing stress, tea provides more benefits than just a refreshing boost. So, whether you drink black, white, green, or oolong, here are some of the top health benefits you get from drinking iced tea.

Tea is a rich source of antioxidants called flavonoids, which creates a detoxifying effect that protects cells from damage and free radicals. Flavonoids are also known to prevent chronic diseases, like macular degeneration, diabetes, cataracts, cancer, and heart disease. The flavonoids found in iced tea, especially the unsweetened ones, can also treat sprains, bruises, and cuts.

Group of polyphenols, which are another type of antioxidant, are also found in black tea and may promote overall health. One study showed that it reduced blood sugar levels and cholesterol.

Another study published in The American Journal of Clinical Nutrition found that those who consumed a bottle of tea containing 690 mg of catechins (a type of phenolic compound) on a daily basis showed a decrease in body fat for 12 weeks.

Moreover, black and green teas have eight to 10 times the amount of antioxidants found in veggies and fruits, by one estimate. Oolong tea, black tea, and green tea – all of them come from the same tea plant called Camellia sinensis. The tea leaves are just processed differently. A green tea extract is a supplemental form of green tea.

2. Cares for Your Teeth and Gums

Some research has shown that consuming tea may help care for your teeth and gums. That’s because tea changes the pH in your mouth, preventing cavities.

Compared to other beverages, tea does not harm the tooth enamel. Black and green tea moreover contains properties that prevent the growth of bacteria and reduce inflammation in the mouth.

The catechins, tannin-type substances, and flavonoids in tea, moreover possess antimicrobial effects. A cup or three of tea daily is enough to protect your gums from decay and disease.

There are more than 3,000 published studies that evaluate the role of tea or tea compounds, including the epigallocatechin gallate (EGCG), and how they may play in cancers.

There’s a lot of literature out there on heart health and tea, according to Anna Ardine, clinical nutrition manager of the UPMC Magee-Women’s Hospital. This is a health effect with the strongest evidence, she added.

A comprehensive review study even found a 35% reduced risk of stroke and nearly 20% reduction in the risk of heart attack among those who drank one to three cups of green tea daily.

Consuming tea regularly may also reduce the many risk factors for heart disease, including high cholesterol, high blood pressure, obesity, and elevated triglyceride levels. In another study, it found that those who drank three cups of black tea daily had an 11% reduced risk of developing heart disease and had an improved antioxidant status.

There’s no denying that tea, black tea especially, generally had a positive effect on health.

Hydration is good. It helps you convert food and fuel to energy, maintain a healthy blood level, and easier for the body to transport oxygen-rich blood and nutrients.

The Harvard School of Public Health has included tea as among the great sources of hydration. Whether hot or iced teas, without the added sweeteners, they help hydrate your body.

Another reason why tea affects your hydration is that some types of tea contain caffeine, a compound also found in energy drinks, soft drinks, coffee, and chocolate. Caffeine is a natural stimulant and once ingested, it passes from your gut, into your bloodstream, and eventually your liver.

There, it is broken down into compounds and affects how your organs work. But too much caffeine may also cause your body to produce more urine as it increases the blood flow to your kidneys.

Which type of drink you consume can make a difference. Unsweetened ice tea is better compared to sweet tea because it is lower in sugar and calories.

The green teas also tend to have the highest amounts of polyphenols, the least processed, and the only type of tea that contains catechin. In short, powdered ice tea or mixes may be convenient, but they are not as healthy as tea made from regular tea bags.

Tea provides a surprising source of manganese, a trace mineral that the body needs for the normal functioning of the nervous system, the brain, and many enzyme systems in the body. Manganese supports your metabolism, helps maintain the strength of your bones, and promotes healthy wound healing.

An 8-ounce of brewed black iced tea contains 520 micrograms of manganese, which is 23% of the daily intake for men and 35% for women.

A British study found that 6 weeks of tea consumption leads to greater subjective relaxation and lower stress hormone cortisol in their blood after a stressful event. People who drank tea were moreover able to de-stress more quickly compared to those who didn’t.

Studies show that a certain type of bacteria in your gut may play an important role in your overall health.

That’s because the gut contains trillions of bacteria and the makeup of this microbiome or bacterial collection is affected by many things, including exercise, diet, and cultural influences. A huge amount (70-80%) of immune cells also reside within the gut.

The polyphenols found in teas may help maintain a healthy gut by inhibiting the growth of bad bacteria, including Salmonella, and promoting the growth of good bacteria. Black tea, in particular, contains antimicrobial properties that improve gut health and immunity and kill harmful substances. Teas can help repair the lining of the digestive tract.

Green tea has been revered for centuries because of its medicinal properties. It has a high polyphenol content and a lot of polyphenols called catechins.

Rooibos or “redbush” is another type of tea with antioxidant properties that are similar to those of green tea. Drinking rooibos tea can help the liver become more resilient to damage caused by oxidative stress.

This beverage has green tea as its base. If you prefer a tea that is enriched with aroma and has almost the same benefits as green tea, then opt for this kind of tea. A mix of jasmine flowers and green tea may even play a role in keeping the inhabitants of Okinawa mentally agile and healthy into old age, as the book Ikigai suggests.

Lemon verbena tea is scientifically called Aloysia citrodora. It’s a kind of herbal tea with medicinal properties and is said to help with weight management.

This tea is great for those people who prefer a drink with a subtle citrusy aroma rather than a strong, lemon flavor that is common in citrus tea blends.

Black tea reduces inflammation and promotes healthy cognition. Evidence suggests that black tea may play a role in preventing inflammation, cancer, heart disease, diabetes, and cognitive decline. So, if you are looking to fend off type 2 diabetes and do not prefer the taste of green tea, the black variety is an effective alternative.

For people who enjoy the taste of a sour brew, then opt for hibiscus tea. It contains antioxidant properties and may bring cardiovascular benefits.

Add Years to Your Life by Drinking Tea

Tea drinkers rejoice as researchers have been continuously showing us the many health benefits of tea. It could increase your lifespan in multiple ways.

A 2020 study conducted on more than 100,000 Chinese participants, that those who drank a refreshing glass of green tea at least three times per week lived on average 15 months longer compared to those who didn’t drink green tea.

But, of course, too much of anything is still bad. So, avoid drinking tea in large quantities. Between three to five cups of tea, every day appears to be the optimal amount.

So, go ahead and pick your favorite blend of tea today.