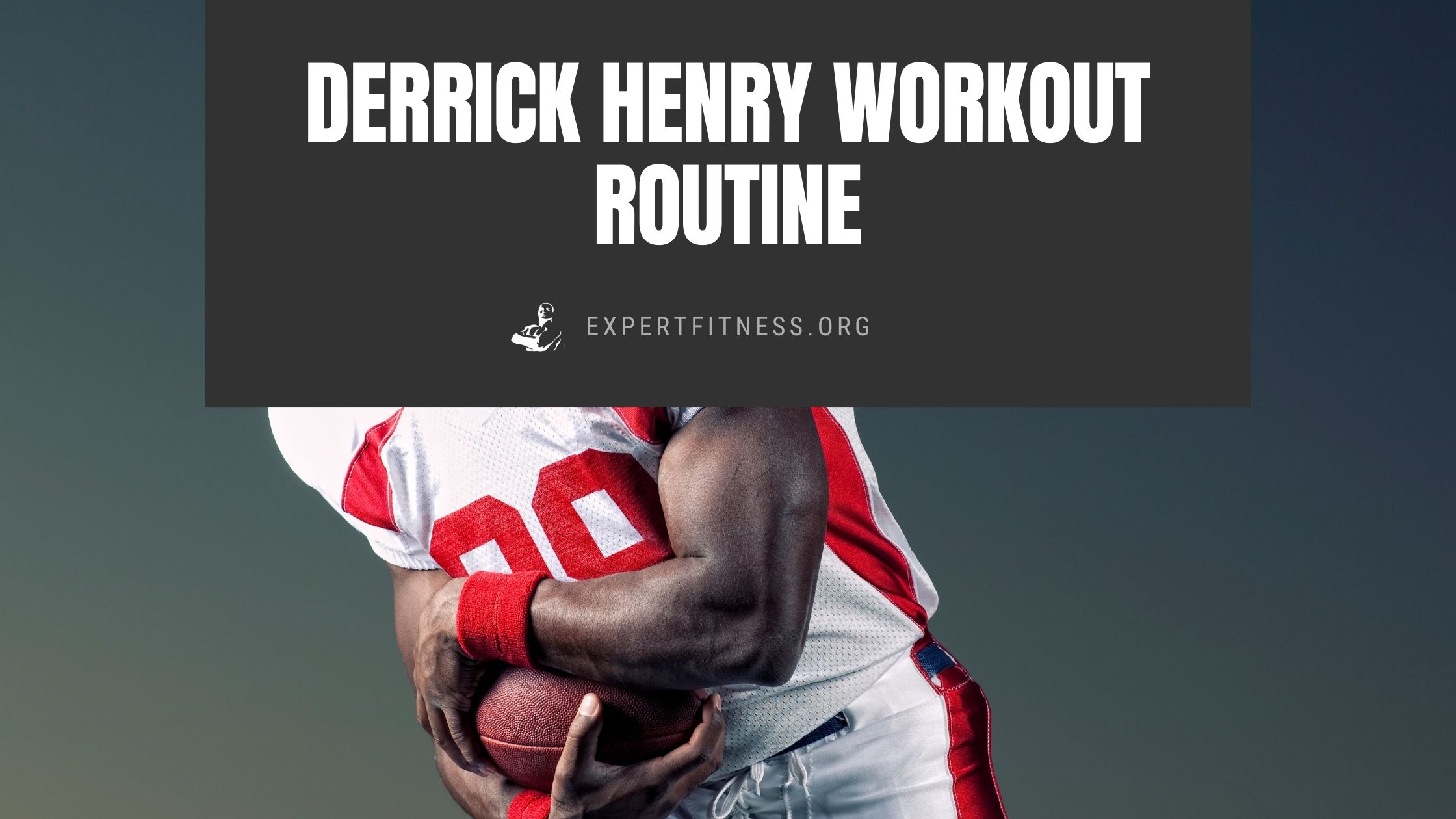 Being a running back for the National Football League can be a lot of pressure, but not for Derrick Henry.

In case you haven’t heard of Derrick Henry yet, he is a Tennessee Titans running back known for his interesting exercise videos. In this article, we will find out what makes Derrick Henry one of the strongest running backs in the NFL.

If you’re interested in taking an inside look at the Derrick Henry Workout Routine, keep reading.

Who is Derrick Henry?

In case you haven’t heard of Derrick Henry yet, he is a Tennessee Titans running back known for his interesting exercise videos. He is also known after his team replaced him after Demarco Murray. Prior to joining the NFL, he grew up in Florida and looked up to his lean-muscled cousins.

Henry is capable of doing various exercise routines from lifting weights, doing insane box jumps, and running up the hills. Thanks to his hard work and work ethic, he gets to maintain his lean muscle.

For Derrick Henry, working out is his full-time job, as a matter of fact, he exercises twice every day. Compared to other gym enthusiasts, Henry arrives at the gym with a little ceremony every offseason for a tight, periodized session of recovery.

His vigorous workout routine also explains why he nails every single performance on the football field with a ball in his hands. Not only that, but it keeps him in shape all year.

A lot of fans are very curious about what his daily routine looks like. So, Derrick Henry, shared a video on his Twitter to give people a closer look into his exercise routine. You can watch the video for a quick overview.

However, if you want to know more about the in-depth details, keep reading to find out!

Henry’s body type is a mesomorph, which means he has a fast metabolism and can lose weight easily. His body is also described as much heavier and taller than most running backs.

His body type raises all kinds of questions on whether he is simply and genetically superior, as well as about the perks it leads to longevity.

Unlike most running backs, Derrick Henry has a better shot and maintains his top form, and enjoys longevity. This is all thanks to his insane but vigorous workout routine.

In this Youtube video, you can watch an overview of Henry’s exercise routine which includes his intense hill workout along with footwork drills, throwing a medicine ball, and push-ups. You will also find him working out at the gym doing lifting weights in unique positions as well as using different workout equipment.

“It’s everyday hard work,” Derrick Henry said in the video and who is also known as “King Henry” on Twitter. In the video, he is seen clocking in at the gym as early as 8:30 AM. Henry’s routine consists of several uncommon workouts with a few afternoon naps in between breaks.

For Henry’s morning workout, he starts with his shoes off, on his knees, with a weighted cylindrical barbell in his hands. He lifts the barbell over his head while swinging his right knee out in front of him (in a kind of sprinter’s stretch). With each leg, he does a few alternate reps for a total of eight reps.

Once he’s done, he’ll pick up a 35-pound medicine ball. Henry starts slamming in down on the padded floor over and over, in the same kneeling position.

Still, on Henry’s knees, he then boosts 40-pound dumbbells and starts hammer curling, keeping the weights at his side, and then raising them to his chest.

According to Melvin Sanders, the owner of Sanders Fit and Henry’s professional trainer, he would also show up again later in the afternoon at 4:30 PM for another workout routine. Melvin said that he would stay at the gym for another hour after doing shrugs and curls.

Other times, Henry would also ask him if he knew any large hills around or nearby for the two of them to run up together.

Henry has earned the title of one of the most dominant running backs in the NFL since joining the league in 2016. One reason for gaining the title is his improbable physique, which is the result of how hard he works off the field. One of the workouts he incorporates into his routine is heavyweights and speed training.

For Henry’s lower body, he concentrates on squats and deadlifts. He does four sets of four repetitions for his back squat workout at 400 pounds. After that, he’ll move to hex bar deadlifts at 500 pounds and perform four sets of six repetitions.

When it comes to speed training, Henry prefers performing it outside instead of a treadmill, a running track, or any kind of flat surface. Henry also takes to the slopes throughout the offseason and works on uphill incline sprints. However, he does it without the skis and snow.

Lastly, he’ll complete quick footwork drills while holding a football before hitting up a dirt hill for a 20-yard sprint to finish off the repetition. Before training camp, Henry might also do 10 uphill sprints. He’ll decrease that amount to five-six sprints once OTAs start.

Henry performs other basic upper body workouts apart from his “go-to” exercises, such as the bench press and power cleans. Without a useful upper body workout routine, Henry won’t be able to push defenders to the ground.

Even though the Tennessee Titans running back can bench 440 pounds, his bench press routine includes four sets of five repetitions at 375 pounds. Occasionally, Henry would reduce the weight to 180 and do 22 straight reps. This helps him improve his heart rate and burn extra fat.

Meanwhile, Henry’s power clean workout includes three sets of three repetitions at 315 pounds. According to the former Alabama running back, he prefers to keep his total reps for each workout low. This allows him to concentrate on his strength and power.

For Henry’s bicep curl routine, he does four different sets for each arm at altering weights without taking any rests between them:

Another workout he adds to his bicep curl workout in several weighted bar exercises. Similar to the previously mentioned exercise, he does this with zero rest. Henry performs 10 sets of 10 reps each of rotating chest press, skull crushers, overhead press, standing rows, and bicep curls while using an 85-pound bar.

Other sets of his weighted bar shoulder shrugs consist of rows, pull-ups, and jump rope. Henry’s previous vigorous workouts also include pushing a Ford F-150 and flipping tires while wearing a weighted vest.

Henry’s meal plan is a muscle-building and high-calorie diet. Despite being one of the strongest running backs, Henry admits to struggling with maintaining his weight. Therefore, he eats a lot of food. Keep reading to find out more about what Derrick Henry consumes to get that lean and strong body.

As a professional athlete, it’s not only essential to excel at your sport but with your diet as well. Therefore, Derrick’s diet is unique compared to most ordinary people. He is also required to consume a large amount of calories due to his large size.

Henry’s nutritionist created a low-carb and high-calorie meal plan for him that consists of a minimum of 3500 calories each day. Yes, he can eat whatever he wants. But he also needs a low-carb diet to maintain his weight and keep his muscles clean.

Henry also needs to consume a lot of calories, since he also tends to lose weight quickly. Some foods he eats include steak, grilled chicken, broccoli, and mashed potatoes.

As mentioned, Derrick struggles with maintaining his muscle mass. However, this does not mean that he can frequently eat burgers and fries. He needs healthy and nutritious foods that will assist him to maintain certain body weight and run extremely fast in the field.

If you are a mesomorph like Henry, you might want to start a diet or meal plans that include foods low in carbs and high in calories. Avoid eating too much fast food or dairy food.

There is an excellent reason why Derrick Henry has earned the title as one of the leanest running backs in the NFL, and that is his vigorous workout routine. Henry treats fitness or working out as a full-time job by training twice a day.

Aside from exercising at the gym and using equipment, Henry also likes to exercise outdoors. More specifically, at the hill where he does footwork drills and running. If you want to achieve lean muscle and a body like Henry’s, the key is to motivate yourself every day and consume nutritious foods as well to maintain your weight.