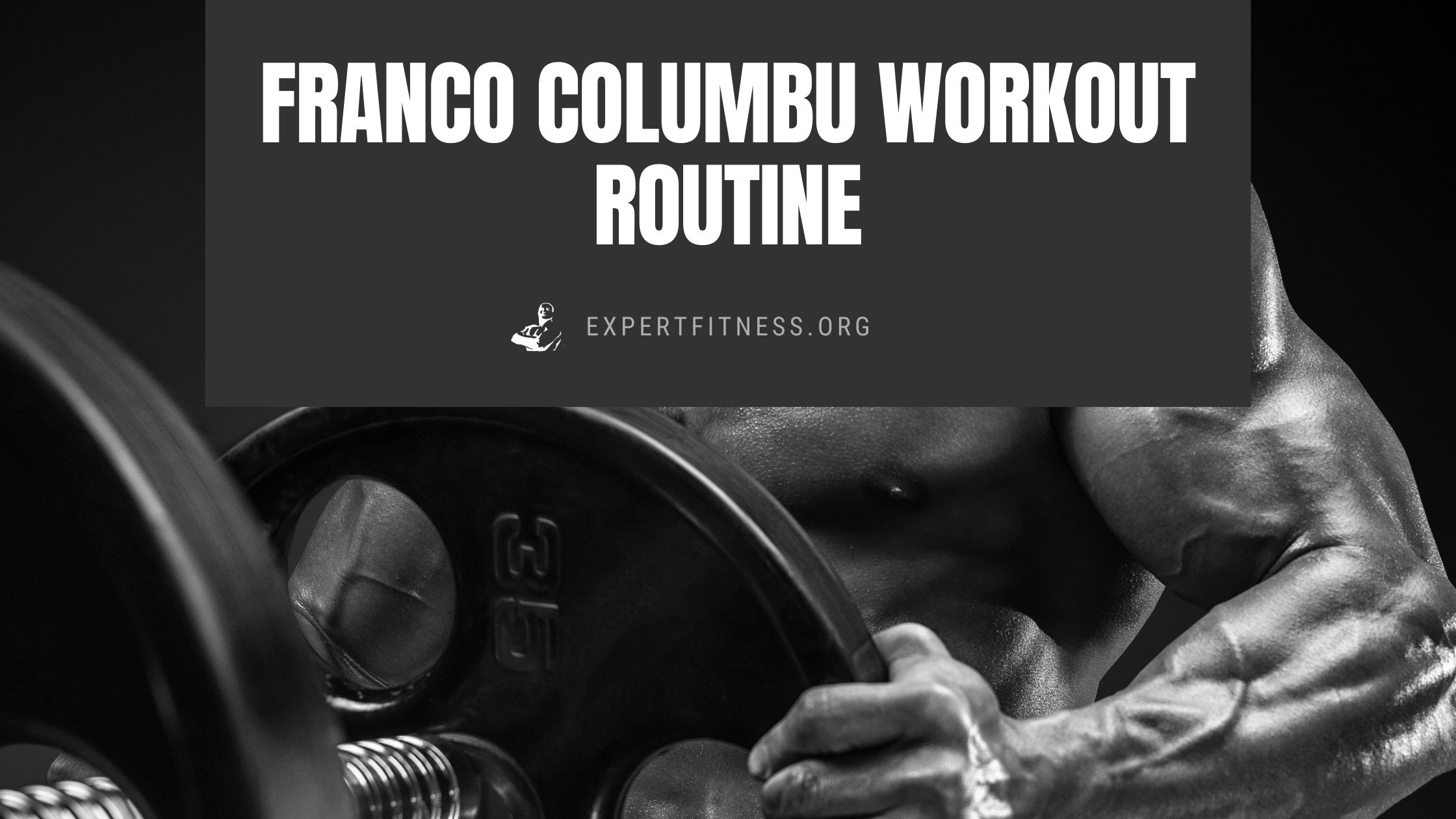 If you’re looking for an exercise program that will help you become a stronger bodybuilder and powerlifter, then you might want to learn all about the Franco Columbu Workout Routine.

In case you haven’t heard of the record-breaking athlete, Franco Columbu is known for his impressive lifts. More specifically, for doing a 525-pound bench press and a 750-pound deadlift. Due to this, he has earned the titles “World’s Strongest Man” and “Sardinian Strongman.”

We created an in-depth article on Franco Columbu’s workout routine and found out what exercises he does to keep his impressive physique. Surprisingly, his workout plan is accessible for both newbies and more advanced weightlifters.

So, if you’re interested in lifting heavier lifts, bulking up, and getting leaner like Franco Columbu, keep reading to find out all about his workout routine!

Who is Franco Columbu?

Francesco Maria Columbu or more known as Franco Columbu is a man with many talents. However, he is more known in the sport of bodybuilding. Apart from being a professional bodybuilder, he is also a boxer, producer, published author, and actor. He has also been a chiropractor most of his life.

Aside from his record-breaking lifts, Franco Columbu’s stature is what makes him even more remarkable. Columbu is shorter than the majority of bodybuilders, standing only 5’5″ and weighing 185 pounds. However, some have also claimed that his height is shorter than 5’5″, but that didn’t hinder him from lifting heavier weights and becoming the strongest man in the world.

In the 1970s, Franco Columbu was also noted for his friendly competition with famous lifters and training partners Arnold Schwarzenegger and Frank Zane. Along with these counterparts, Columbu was part of what would become known as the golden era of bodybuilding from the 1950s to the 1970s.

Franco Columbu has a mesomorph body type, like a lot of weightlifters. This body type is strong and well-muscled.

Despite Columbu’s height, he still makes an efficient lifter. One reason why he gets to maintain a particular weight is his diet plan and workout routine.

Columbu split his workout plan into 14 days, also known as the 14-day workout plan. For him, he believes that rest days are important to one’s triumph in the gym. Therefore, he would take breaks on the 7th and 14th days.

Here is a breakdown of the Franco Columbu Workout Plan:

For Franco Columbu’s chest workout, complete three cycles of each superset group. Keep in mind that “superset” means switching directly from one exercise to the next. No taking any breaks between exercises.

You can follow Columbu’s strategy, where he reduces the rep count. Then, he adds the weight each time an exercise is completed with an asterisk (*). We highly recommend you do this for optimal results.

For Superset 1, which includes three sets, Columbu does barbell bench press of 15, 10, and 4 reps (*). Afterward, he proceeds with 20 reps of cable crossovers.

For Superset 2, which consists of three sets as well, Columbu performs flat bench dumbbell flyes of 20, 15, and 6 reps (*). Then, he proceeds with 20 reps of cable crossovers.

Finally, for Superset 3, he does 15 reps of incline bench press. Then, he performs 25 reps of barbell pullovers. Afterward, he performs dips to failure cable crossovers with 25 reps. Do these exercises with three sets as well.

Complete all the exercises back-to-back and then return to the top of the set.

For Superset 1, which consists of four sets, start by doing eight reps of cable pushdowns. Then, switch to eight reps of standing dumbbell curls.

For the third and final Superset, do eight reps of seated barbell extension. Then, switch to eight reps of dumbbell incline curl. Repeat for four sets as well.

For Columbu’s leg routine, he starts with barbell squats in 20, 15, ten, eight, six, four, and two reps. Complete this exercise with seven sets. Next, he does four sets of leg presses in 50, 25, 15, and eight reps.

Columbu also alternates between having the final two moves (barbell lunges and deadlifts) during each leg day. This allows him more time for recovery and increases the weight he could use during each exercise.

Begin the superset with one arm dumbbell row in ten reps. Switch directly to ten reps of hammer grip pull-ups, completing it by attaching a parallel grip cable to a pull-up bar. Complete the superset with three sets.

Unfortunately, Columbu did not share any specific details about his ab workout in his schedule.

Columbu believes that resting is essential to one’s success at the gym and any sport. Taking breaks can contribute to your improvement in your sport as well, so know that it’s okay to rest in between workouts.

The Franco Columbu diet includes fresh vegetables, fresh fruit, and protein to augment his lifestyle as a weightlifter. Here’s a more in-depth overview of what Columbu eats for his meals:

Every morning, Columbu eats a hearty but healthy breakfast. He would consume foods rich in protein including four fresh eggs cooked in different styles. He would also eat this with homemade yogurt, which is plain and made with raw milk, with added granola cereal.

He would also add fruit to his breakfast. Instead of drinking caffeine or energy drinks, Columbu would either drink a large glass of orange juice or eat fresh in-season fruit.

Aside from eating a healthy and well-balanced diet, Columbu believes that staying hydrated before and after exercising is important. Therefore, he’d get a jump on his daily hydration and also drink a glass of water every morning with breakfast.

Last but not the least, Columbu also takes his vitamins every morning and after eating breakfast. However, the athlete did not disclose what kind of vitamins he takes, but we recommend you to take them as well to boost your active lifestyle.

Columbus lunch almost completely contains protein and vegetables. Instead of using salad dressings, he would always have a large vegetable salad with oil and vinegar. He would also have a cooked fresh vegetable on the side.

Some of his favorite foods rich in protein are chicken, fish, liver, lamb, and prime cuts of beef. He would eat his lunch meals with mineral water or wine.

You might want to start taking mid-afternoon snacks if you plan to work out like Columbu to keep you full all day. For the Sardinian Strongman, he usually eats a plate of imported cheeses. He would also pair the cheese plate with something tasty such as nuts or fresh fruits.

In addition to his cheese plate, Columbu would eat tuna fish with his afternoon snack. Tuna is an easy and healthy way to add protein to this meal to keep your body moving, especially if you are gearing up for an evening workout like Columbu.

Similar to his lunch, Columbu follows the same guidelines for his supper. Usually, he includes a form of good-sized salad and cooked fresh vegetables on the side. He would also add a choice of his broiled fresh protein. For beverages, he’d also enjoy his dinner with wine or water.

Most people would eat dinner as the last meal of their day. But for Columbu, he would eat a late evening snack that would include a small bowl of fresh yogurt. One good reason why he prefers yogurt is that it helps with the digestive system.

Columbu’s diet does not include any specific portion sizes. However, we suggest that you adjust the portion sizes that are appropriate for your needs. To keep your body fueled up, you will also be required to eat good-sized portions of food. This will maintain your body’s fuel and performance.

Another important reason why you should eat a suitable portion size for your meals is muscle recovery. This is very essential if you perform vigorous workouts. Consuming enough will not only help you bulk up like Columbu.

Carbohydrates are another component that Columbu includes in his diet plan, which most experienced bodybuilders lack in their diet. According to one study in 2018, an increase in carbohydrate intake could help with leaner muscle mass. Therefore, for you to bulk up you should add more carbs. However, we also recommend you track your carbohydrate intake aside from relying on scientific research only.

Franco Columbu was the world’s strongest man and has gained the title of “Sardinian Strongman” and for good reason. Despite standing only five feet and five inches, his workout routine allows him to get leaner and stronger to be able to lift weights.

His workout plan may consist of supercuts or sets of exercises without taking breaks, he still takes days off, more specifically on the seventh and 14th day of his 14-day workout plan.

Aside from his routine, he maintains a healthy and well-balanced diet by including lots of vegetables, fruits, protein, and carbohydrates on his plate.