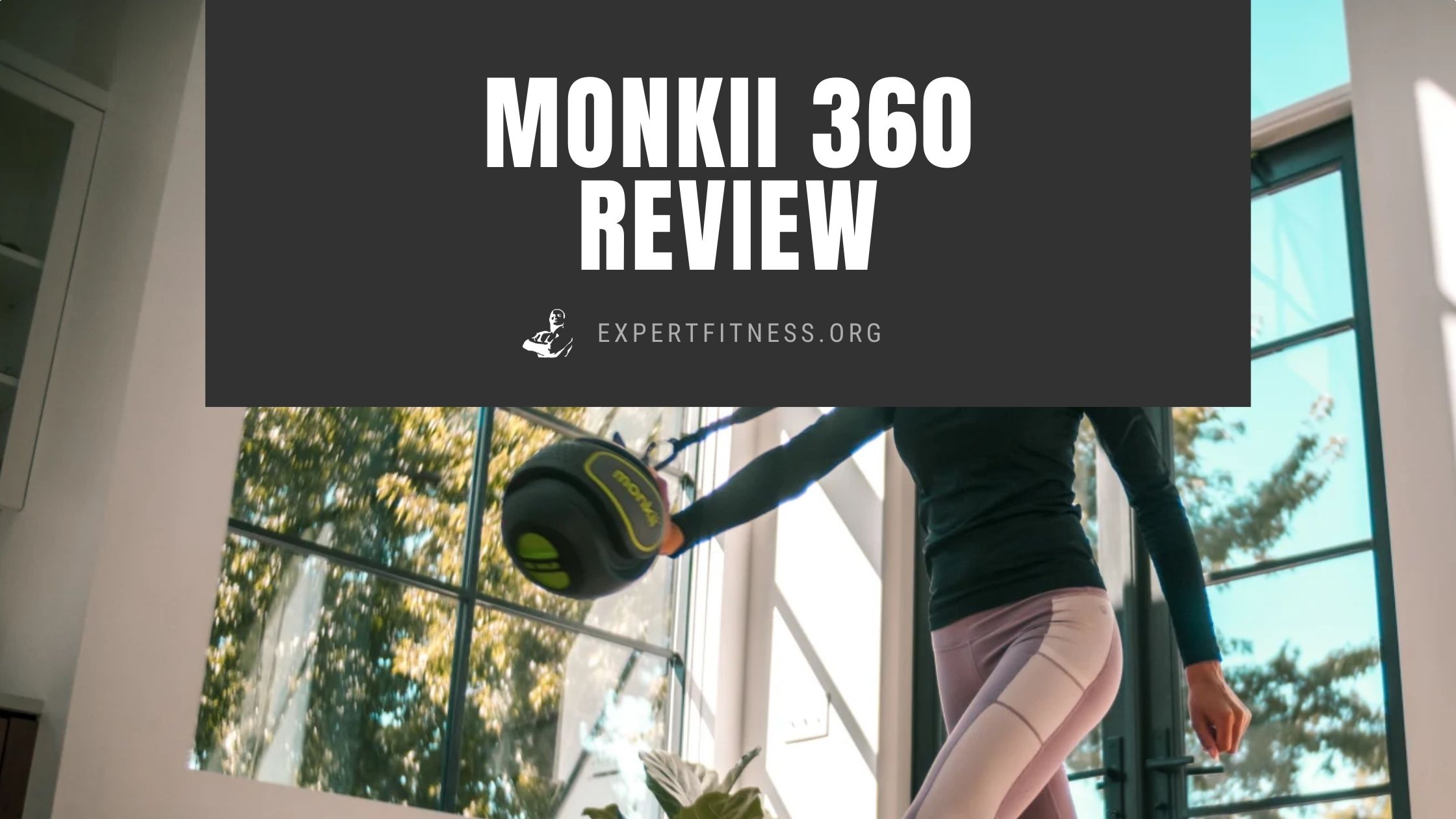 Are you looking for a singular piece of exercise equipment that will allow you to work all the muscles in your body?

Something that can easily travel with you and allows you to easily and quickly adjust its resistance and weight?

It’s a weighted ball that replaces all those heavy machines and one you can use in the comfort of your own home or while traveling.

Just like other Monkii devices, the Monkii 360 is a fantastic tool for building strength and muscle – no doubt about it.

So, if you’d like to find out more about this fitness device, keep on reading.

Everything you need to know about this equipment will be covered in this in-depth Monkii 360 review from its pros and cons, features, workouts you can do, and what other people are saying about it.

The Monkii 360 is a functional core trainer/ resistance trainer that will help you strengthen every muscle in your core without the need to invest in other gym equipment or going to the gym.

It looks and works like a modular medicine ball that you can set up in seconds. With its built-in universal anchor and resistance bands called the DynaForce™ Bungees, you can easily attach it to a pole, tree, or door.

The DynaForce™ resistance bungees come in 8 resistance levels. You may choose the Cardio resistance band (20 and 25 pounds), Hybrid (30 and 40 pounds), Core (35 and 45 pounds), Starter (15 pounds), and Tactical (50 pounds). All these will provide you different levels of tension throughout the entire range of motion.

You’re meant to jump, lunge, and do other functional moves with this Monkii 360 ball to mimic the real benefits of both strength training and cardio in one device.

When you grip the Monkii 360 ball, it engages more of your muscles. And because of its wide grip, your forearms also work harder to maintain a good grip.

This fitness device is also incredibly useful as it encompasses everything you’ll ever need in an effective workout. It has a hollow interior, where you can add your desired modular weight.

As you get stronger, simply insert heavier weights into the Monkii 360 or use a stronger resistance level.

Both Level 1 and 2 weights are meant for beginners, Level 3 and 4 for intermediate, and Tactical weight for pros.

The big claim of the Monkii team is that four minutes of exercise using this equipment is better than an hour-long run and we can see why.

They linked this claim to a Tabata study, which demonstrated that high-intensity intermittent training is more effective in increasing the VO2 max –maximum (max) rate (V) of oxygen (O₂) — the body can use during exercise.

While no Monkii 360 or running was involved in that study but a mechanically-braked cycle ergometer instead, the exercise pattern that Monkii 360 equipment offer qualifies as high-intensity intermittent training.

That’s what Tabata training or Tabata protocol is all about and what Monkii 360 is capable of. It’s a form of high-intensity interval training (HIIT) that will get your heart rate up for short periods of time while in the anaerobic zone.

As you purchase this functional gym equipment, you’ll also get access to a library of exercises through the Monkii app.

It will serve as your personal trainer in a pocket. There are over 50 core workouts that you can follow on the Monkii app.

For better foot mechanics and an increase in the overall range of motion, you may also pair the Monkii 360 with the Monkii barefoot training system.

Monkii 360 for Full-Body Exercises: Is it worth it?

The Monkii 360 dynamic resistance trainer is super worth it to help you get in a full-blast functional training session in less time.

Regardless of your fitness level and whatever your fitness goal is, this Monkii device is a good choice. It is incredibly portable and takes only a few seconds to set up.

In-Depth Review of the Monkii 360

Weight/resistance: between 15 to 50 pounds

You can basically do full-body exercises with Monkii 360 that move you through a huge range of motion.

Any exercise where you rotate, bend, squat, press, pull, or lunge is allowed as long as it’s a workout that keeps you in motion.

But don’t worry, the Monkii app shows you exactly how to perform each exercise to guide you throughout the entire workout.

[You can also read about: Monkii Bars Vs Trx]

Pick the MassCore Level You Want

Just add the modular weighted core of your choice in the hollow interior of the weighted ball to increase the weight during your workout.

Five levels of weights are available and these are relative to their number. Level 2 is the lightest option, while Level 3 is good if you want to stay relatively active or you consider yourself decently wild in your workouts.

Level 4 is a heavy option for non-tactical backers. If you are confident with your physical activities, this is a good MassCore Level. Then, the extreme level is Level 5 (Tactical).

You may also choose the Advanced Training Focus if you can handle the Cardio and Core bungees. But if you think you’re a badass in terms of your fitness level, then go ahead and skip to Level 5.

The Monkii 360 has multiple anchor points for instant set-up. This is where you attach the resistance band of your choice. The other end of the resistance bungee is designed to be attached to a door, pole, or tree.

It’s a patented grip design that activates more muscles at once, which means you’ll get a more effective and efficient workout.

Monkii guarantees a state-of-mind, instead of results like some fitness companies would. So, if you think that you are not moving more, thinking differently in terms of workouts, or feeling wild in your training within 21 days, then they allow a full refund of the product. No questions asked.

You may check out this link for more information about Monkii 21-day hassle-free return.

Who is it Best for?

The Monkii 360 is specially designed for busy people. Whether you’re a traveler, corporate slave, busy mom, lifehacker, entrepreneur, or just gym-hater, this efficient training tool will allow you to strengthen your core, build muscle, lose weight, and be free so you can do more of what you love.

What Do People Say About it?

YouTuber Stevie Richards used Monkii 360 for a week before giving his review. For his workout experience, he said, “[This] is for people who have a limited amount of space… Ideally, when you’re doing resistance band work or any kind of suspension training work, you want the door to close in towards you. Safety first…

Really feeling it (referring to the workouts). [I was] breathing heavy, but a very efficient way to burn the most amount of calories. I feel the resistance effect. I feel my muscles [working]. I feel the grip in all these different things from the Monkii 360. I’ve been a fan of all their stuff: Monkii bars 2, Pocket Monkii, and now the Monkii 360. And of course, the Isocore. This gym equipment is a little more explosive. ”

Meanwhile, RIZKNOWS shared, “It’s a space-age looking sphere, but it’s just as about the workouts as it is the product itself…It’s more so a fitness system. It’s really designed for people that have limited time, limited space, limited access to the gyms, limited drive. It’s similar to the Monkii Isocore trainer, only it’s larger. It’s also meant to be secured over or under a door. It meant to fit in any size of hands.”

In one Reddit discussion about how four minutes of training using Monkii 360 is more effective than one hour of running, one Reddit user said, “They are technically not lying. The exercise pattern they offer with this gadget would indeed qualify as high-intensity intermittent training while an hour of running at a constant pace would qualify as moderate-intensity endurance training.”

The Verdict: Should I Buy It?

The Monkii 360 is an interesting workout equipment you’d surely love to get your hands on. Whether you have been training for years or are a newbie to the gym, the Monkii 360 will do you a whole world of good.

It does not require much space, allows you to do high-intensity workouts, and improves your functional strength.

Just like other Monkii products, such as Pocket Monkii and Monkii Bars, this Monkii 360 allows you to create a gym anywhere.

Thanks to the power of resistance training. If we are to base it on customer reviews online, users are generally happy with their purchases.

So, if the benefits of Monkii 360 don’t motivate you to achieve your fitness goals even when you’re on the move, we’re just not sure what will!