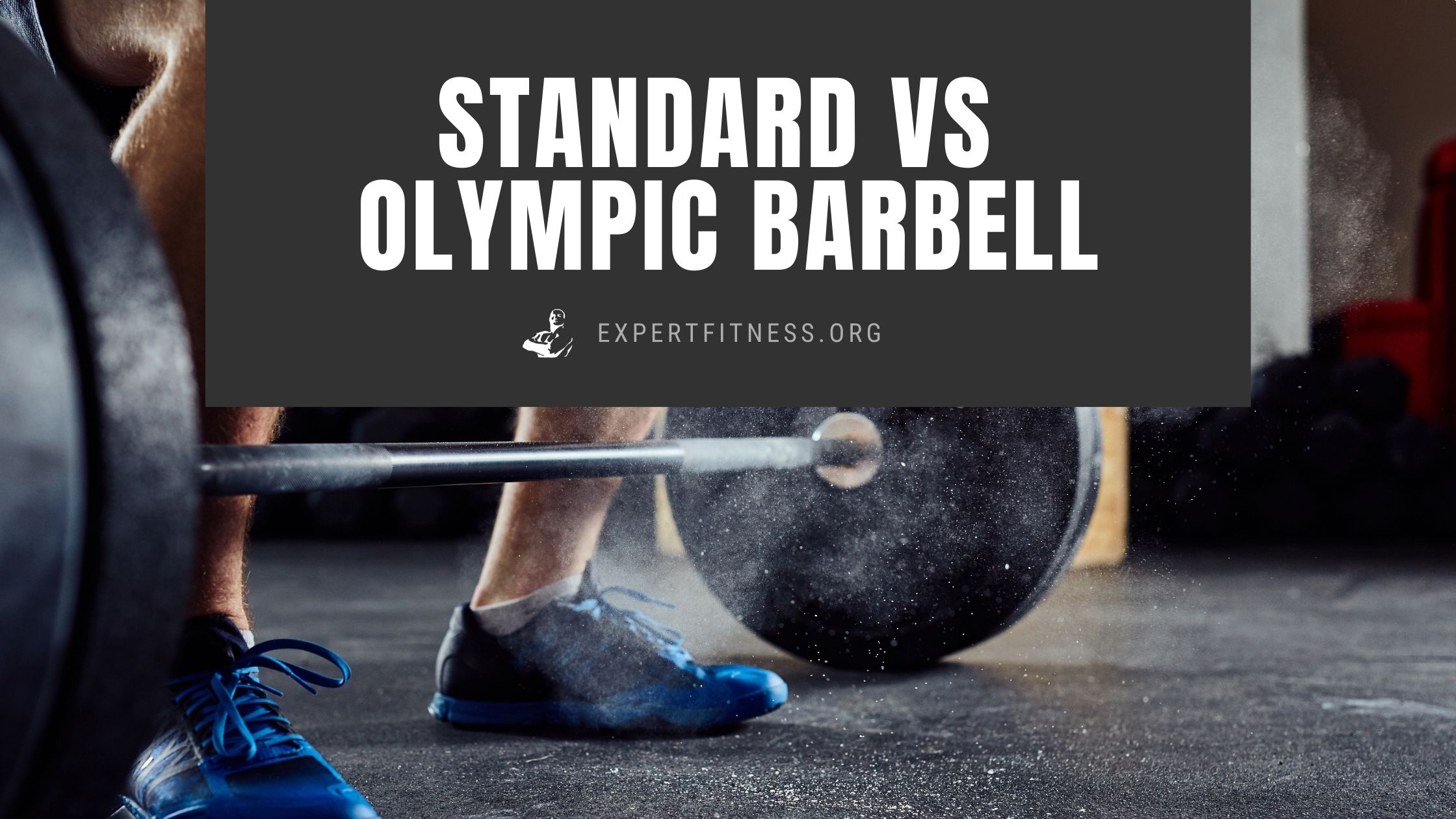 For something that is pretty much like a giant metal stick, the barbell is pretty useful. It can improve your athletic performance and as you gradually perfect your technique, you will also strengthen the neuromuscular connection.

No doubt. Such gym equipment can open up a world of compound exercises, where you’re using more than one muscle group at once. Think of the “Big Four” barbell exercises – deadlift, overhead press, bench press, and squat – that are great for building muscle as they utilize multiple muscle groups.

In short, barbell exercises save you time because you’ll do a straightforward lift rather than using different gym machines. But despite being simple, there are different types of bars that can be used.

And two of the most popular types of barbell are standard and Olympic. How then will you know which one is the best barbell for you?

Let’s put you on the right path in this comparison of Standard and Olympic Barbell so you can choose the right weight lifting bar for you!

What is a Standard Barbell?

Standard barbells are a lot lighter compared to Olympic bars because of the difference in steel as well as the addition of thicker end sleeves. Typically, standard bars weigh between 5 and 12kg (10 and 25lbs).

What is an Olympic Barbell?

On the other hand, Olympic barbells are designed to withstand higher weights and are more stable than standard barbells. They are meant to be used with other Olympic types of equipment, like Olympic power racks and Olympic workout benches. As a consequence, Olympic barbells generally cost more.

Now, let’s take a more detailed look into the differences between the two.

What are the Differences Between Standard and Olympic Barbells?

Standard barbells can usually handle only up to 160kg (360kg) before they are permanently bent while Olympic bars are designed to handle high loads of 500kgs (1,100lbs) or more

Knurling is the crosshatch pattern on the part of the bar. This is textured and designed to increase the amount of grip by increasing the friction between the bar and the hands.

Have you noticed the way Olympic weightlifters move during lifts or squats? The directional pull can actually put too much pressure on their wrists.

Modern barbells are designed to be somewhat elastic so that it will be possible for the bars to “whip” and bend when the plates are heavy enough on the ends of the barbell.

Bar whip is the oscillation (movement) that happens when the bar quickly changes directions. In simple terms, the whip is how far the barbell can bend and bounce back.

Skilled lifters use whip to introduce momentum into their lifts. Compared to standard barbells, Olympic weightlifting barbells usually have more whip. Some special types of Olympic barbells have different amounts of the whip, as follows:

The length difference between a standard and an Olympic barbell is among the first things you will notice. Olympic barbells are designed to meet the International Weightlifting Federation’s competition standards. Thus, they have standard sleeves diameter, length, and weight.

Contrastingly, there is no regulation on weight and size on the standard barbell, the reason why you may find differences in dimension when you’re shopping for a standard bar.

Both types of the bar are generally made from the same cast of iron, except the solid rubber on Olympic bumper plates. But they differ styles.

Also, Olympic weight plates have a center hole in 2” diameter to fit on an Olympic bar. Some Olympic plates are color-coded based on IWF standards and are coated in solid rubbers so that they can be easily dropped from above without scratching the bar.

They come in more styles, like those with grip plates for safe handling.

Of course, this Olympic vs. standard comparison won’t be complete without including the price difference of the two types of the barbell. Standard barbells are usually way cheaper than Olympic bars.

At best, you can purchase a standard bar for $20, while an Olympic barb will cost you more. This is because you are actually paying a high price for the bar’s build quality, whip, compatible 2” weight plates or Olympic weights, and high tensile strength steel.

Honestly, we’re into barbells and because of that, we’ve researched and used plenty of this gym equipment. We look at things, like their function, durability, value for the price, customer service, and warranty.

With that, let’s take a look into which one our team likes the best.

Features to Consider When Buying a Weightlifting Barbell

To complete our standard vs. Olympic barbell comparison, we share below a quick buying guide to help you decide what weightlifting barbell to choose:

The finish on the Sleeves and Bar

The finish on Olympic and standard barbells serve various purposes, such as adding to the “feel” of the barbell, protecting the equipment against rusting, or aiding in grip.

The most expensive finish is chrome as it offers the best protection from rusting. Chrome finish bars may sleep slightly slippery than bare steel, but they tend to have better knurling to compensate.

A zinc finish protects the barbell more from rust than black oxide and steel finish. However, they quickly lose their sheen, which requires regular maintenance to keep looking their best.

Higher-end standard or Olympic bars are made with stainless steel. Meanwhile, coatings that provide solid durability to barbells include black oxide, zinc, and Cerakote.

Bottom Line: Which is Right For Me?

The barbell is one of the simplest-looking gym equipment, but choosing the right type of weightlifting barbell can be challenging.

To know which one is right for you, consider the amount of weight you plan to lift. If it’s anything under 250lbs, a standard bar would be a wise choice. Unless you’re a competitive powerlifter, there’s really no need to choose an Olympic bar.

But then again, this is just an opinion. The space in your home garage or home gym is also an important consideration. If your home gym can’t fit a 7-foot bar, you can simply opt for high-quality standard bars out there.

Furthermore, a standard bar is a fine choice when you’re just beginning to build your home gym. It is affordable and gets the job done. Yet, you may run into some problems with a standard bar later on if you begin progressing to heavier weights.

If you’re still in doubt, let us summarize it for you so you can have a better buying decision. If you already own 1” weight plates, on a narrow budget, or you consider yourself a seasonal lifter, then your best choice would be a standard barbell.

However, if you are an experienced lifter, you need a new barbell for your power rack, or you prefer high-quality gym equipment, then go for an Olympic barbell.

That wraps it up. We wish you good luck in your training!